Can I Get My Genealogy More Organized in 2016?

I've been a fan of Dear Myrtle for quite a while and love that she wants others to learn. She takes large concepts that might seem too big or scary, like Mastering Genealogical Proof or Genealogy and the Law, and creates the learning lessons in smaller more brain-digestable parts.

So when I saw that she was starting the new year out with "Finally Get Organized! 2016 Weekly Checklists," I cheered out loud at my computer!

I have been the lucky recipient of photos, programs and other memorabilia from both my parents and my husbands' parents. I've been collecting genealogy documentation for 30 years. And I have my own collection of photos and family memorabilia. So there is definitely "stuff" that needs organizing.

So bring it on Dear Myrtle, I've been waiting for an excuse to clean up my genealogy act for a long time!
Posted by Lynn Tenney at 2:13 PM No comments:

Email ThisBlogThis!Share to TwitterShare to FacebookShare to Pinterest
Labels: DearMyrtle, Finally Get Organized 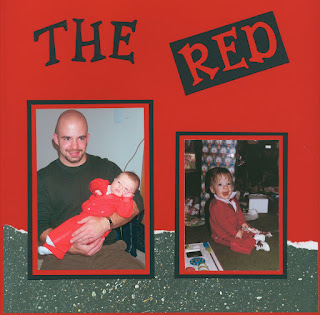 My previous post mentions two Christmas Eve memories, one of which was the unexpected premature birth of my son, Josh in 1978. His lowest weight was 2 pounds 7 ounces, and he came home at 6 weeks old weighing just 4 ½ pounds. We were so fortunate that he had no major difficulties and was able to come home after such a short stay.


He was small for his age and so at 1 year old, he weighed only 15 pounds. On his first birthday, Christmas Eve 1979, we spent the evening at my parents' farm. Josh wore a red tuxedo I bought for the occasion. He looked very dapper and he posed quite readily for pictures. My favorite was a picture with my father. 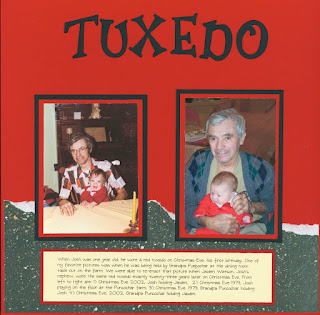 I saved that red tuxedo and when my first grandson, Jaiden, was born, he also wore it for Christmas Eve celebrations. It was very special to see that red tuxedo being worn again 23 years later in 2002. 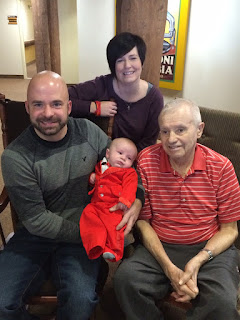 And so it was indeed exciting for me to be able to see Josh's firstborn, a son named Soren, wear the same red tuxedo on his first visit to his great-grandfather. Soren was born in early October and is 2 ½ months old. At left you see my son, Josh, with his wife, Amy, their son, Soren, and my father.

Below are my husband and I, joined by Josh, Soren and my dad.

The red tuxedo, thirty-six years later, is now being worn by the son of its original owner. And it was so special to be able to share it with my father, almost 90 years old. This season is made extra special by this special memory shared through several generations. 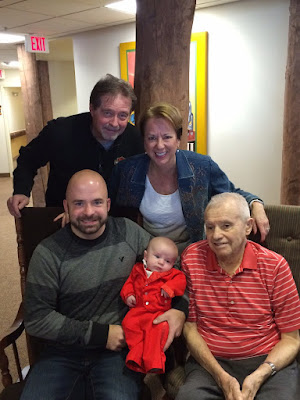 "The Advent Calendar of Christmas Memories (ACM) allows you to share your family’s holiday history twenty-four different ways during December! Learn more at http://adventcalendar.geneabloggers.com.”
Posted by Lynn Tenney at 6:32 PM No comments:

Every holiday brings poignant memories: the last Christmas with my mother, the first Christmas with a new baby, or every time we are blessed with a new family member through marriage. But there are some memories that spring to the front  of my mind when I am asked to tell a Christmas story. Here are two:

Thirty-seven years ago I was prepping to host my grown siblings for Christmas Eve for the first time ever. My parents were taking the youngest three (of nine) to Florida for a rare Christmas vacation treat.

The tree was decorated, the house was clean, the cookies and bars were baked; things were all ready to go. When I woke up Christmas Eve, I realized that I had been experiencing Braxton-Hicks contractions but they were a little stronger than I remembered during my first pregnancy. I called my OB and he suggested going to the hospital to be sure.

We had to get dressed, arrange child care and drive to the hospital but I wasn't overly concerned. Upon arrival 90 minutes later, I was informed, "You are going to have that baby today." I knew I wasn't yet 30 weeks along and now I was petrified, especially when my husband was told there wouldn't be room for him in the delivery room. Less than 60 minutes later, just before 11:30 AM, Josh was born. He weighed less than three pounds but was pretty healthy otherwise. The hospital was equipped with a Level 3 nursery so we were quite fortunate that he had the best care. 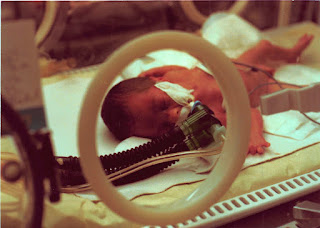 My aunt generously offered to host the older siblings for Christmas Eve. In these pre-cellphone days, we had no way to contact my parents but when they tried calling, of course there was no answer. My dad then called his brother and was told, "Congratulations, you're grandparents again."

My parents honestly couldn't figure out what he was talking about and asked who had the baby. Since I wasn't due until the first part of March it didn't occur to them that it was me.

Josh was in the hospital exactly 6 weeks and went home with us at the hefty weight of 4 pounds and 8 ounces. By then he seem huge to us, but to others he was tiny indeed. It will always be my most memorable Christmas.

This Christmas will also be memorable: 37 years later, Josh and his wife, Amy, will be bringing their first born, Soren Christopher, to celebrate with us. 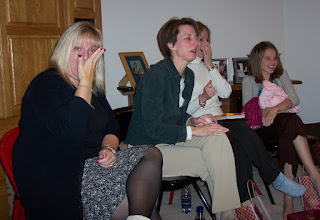 Whenever I see this picture of my sister-in-law wiping away tears of laughter, I'm reminded of the year my sister, Jill, and her family stayed with me. The downstairs guest room has a gift-wrap table setup in it so that those materials needed are always easily at hand. Jill seemed to really appreciate it as she arrived from Alabama with presents that still needed wrapping.

Jill had mentioned misplacing something in the guest room but I didn't give it a lot of thought. I knew we would find it before it was time for her to return home. 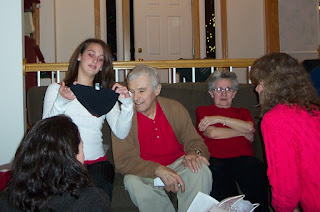 Fast forward to Christmas Eve gift opening. It was my father's turn in our long drawn-out one-at-a-time gift opening tradition. My father is elderly, has macular degeneration and is legally blind. He opened up his gift from my sister's family and was delighted with the sweater inside. But then held up something small and black in shiny fabric and he said, "what's this?"

My niece, sitting next to him, held them up so there was no doubt, for those of us with sight, anyway. And my sister, Jill, exclaimed, "There's my underwear,  I've been looking for those!"

My dad was still confused so we had to explain Jill had inadvertently wrapped up her underwear in his present. It makes me laugh to this day just remembering my dad's confusion and Jill's sudden realization as to where her underwear actually ended up. And the picture of my sister-in-law wiping away tears of laughter brings it all back.

And I tend to steer away from the candies that are "putzy." Maybe next year, after I retire, I can get back to some of those!

For now, I limit myself to just a few family favorites but I've included most of the old standbys as well. 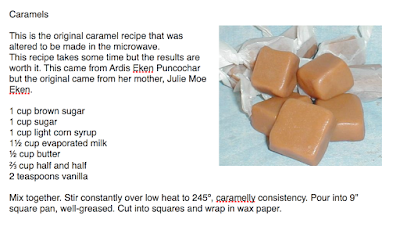 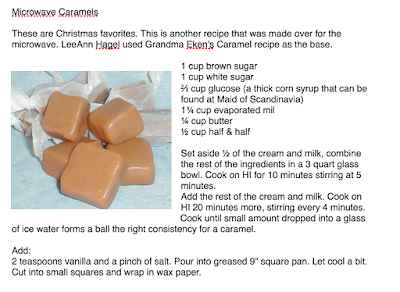 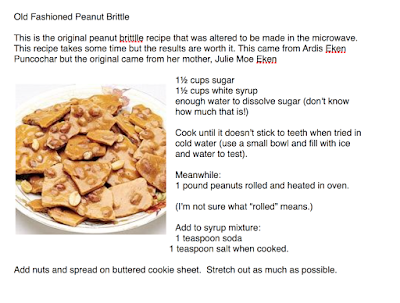 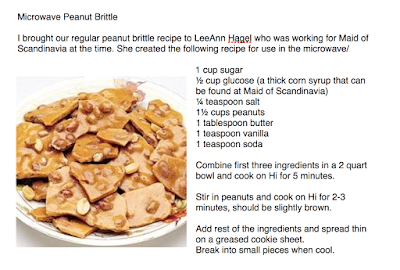 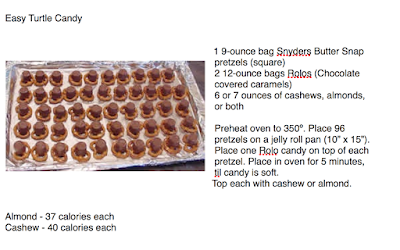 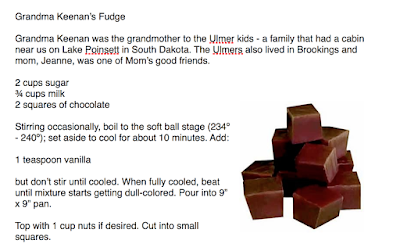 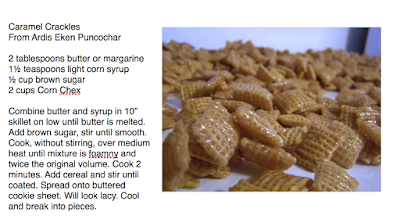 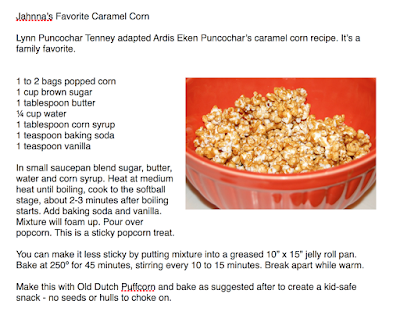 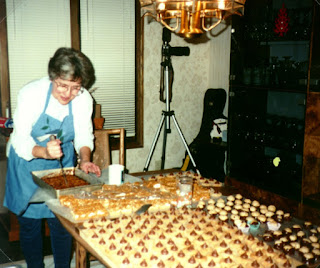 I have many great memories of Christmas baking with my mom, sisters and sister-in-laws. It was an annual event until my mother's Alzheimer's interfered. We would make dozens and dozens of cookies from morning until night. It was fun but exhausting.

Now I usually make just a few kinds of bars and a few kinds of cookies. I also occasionally make caramels or peanut brittle, and there are usually a few different kinds of Chex Mix. The last few years I have been adapting some recipes to make them gluten-free as my husband can no longer have flour. My experiments have been fairly successful, if I do say so myself.

The recipes below, though, are the original recipes and are not gluten-free. 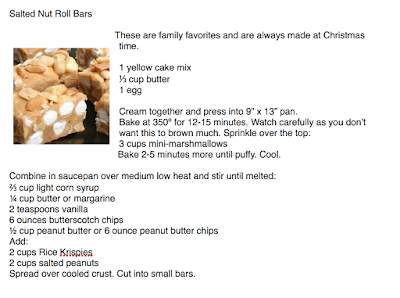 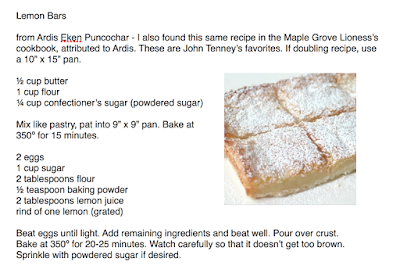 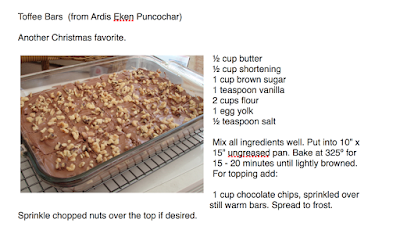 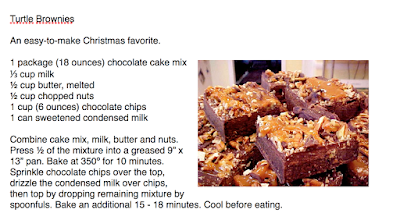 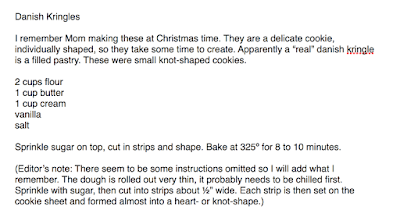 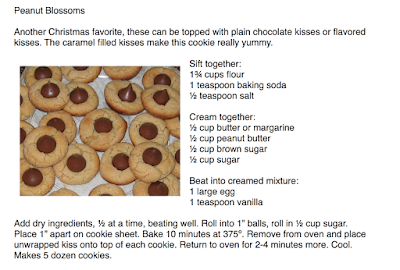 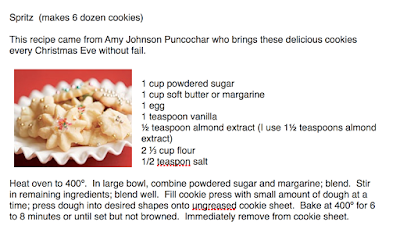 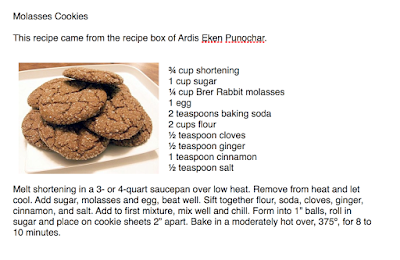 I've fallen hopelessly behind but decided to make it up by publishing 65 years of Christmas pictures. I'll try to put them in some sort of order. It won't exactly be wordless but the captions will be brief.


It's amazing to see how the family has grown over the years. What a blessing to have them all in my life.

Posted by Lynn Tenney at 2:18 PM No comments:

Christmas Eve is the time our family opens gifts. It's worked out through the years, spending Christmas Eve with my family and visiting my husband's family on Christmas Day. Now that my children are all married with families of their own, it continues to work out. It's such a blessing to have everyone together on Christmas Eve. 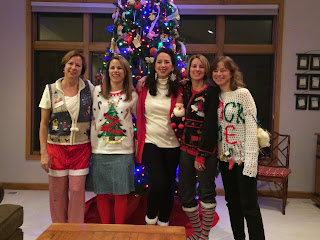 My sisters and I have a tradition that is year-round. Whenever we get together, and there are 5 of us spread across the country, we capture pictures of the event. It seems we are able to all be together every year or two and I feel so fortunate when that happens. My older sister lives in Boston, then comes me, the next sister lives in Birmingham, the next in Dallas and the youngest is only about 45 minutes from here. It's one of my favorite traditions, but when it happens at Christmas, it's extra special, even if we are wearing "ugly" Christmas attire.


Presents are opened after dinner and cleanup. We start with the youngest and opening just one gift. Then the next youngest opens a gift, and so on. After several rounds, only the youngest children still have gifts and then we just let them open them all at once. It's really fun to see each gift opened and given special attention.

Sometimes we tell the children that the order is changed and we're going to start with Grandpa, the oldest. Oh, my goodness, the groans of agony! Of course, we relent and start with the youngest. But it is all in fun.

Santa always wraps the gifts for the stocking in white tissue paper. On Christmas morning, when the kids were little and ripping away at the wrapping, it looked a bit like a snowstorm. One year, instead of the traditional gifts, everyone got a brand new velvet stocking, emblazoned with their initial, full of tissued-wrapped gifts. They were told the gifts were clues to a bigger "Santa" gift waiting in the wings. Imagine 10 people tearing the tissue wrapping, shouting to each other and trying to assemble 15 clues together. It was hysterical to watch!

I'm really happy that some of our traditions have stayed the same over the years. But there have also been some subtle changes. And I love that my children are developing their own traditions, as well. It warms my heart to see know their own children will cherish them as they begin their own families.

"The Advent Calendar of Christmas Memories (ACM) allows you to share your family’s holiday history twenty-four different ways during December! Learn more at http://adventcalendar.geneabloggers.com.”
Posted by Lynn Tenney at 5:22 PM No comments:

Lynn Tenney
Family history and education have been my passions for the last 35 years. My major experience is in the upper midwest (Minnesota, the Dakotas, Iowa, Wisconsin), New England (especially Massachusetts) and Norway. I also research in Illinois, Ohio, Pennsylvania and New York. I love researching in the quiet, early morning hours - in just a few minutes a day, you can accomplish a lot.